Russia’s War against Ukraine has lead to increasing electricity prices in EU. As a consequence, Hetzner had to increase their prices for dedicated servers significantly, also affecting my DragonFly server and my monthly bill. This, and the energy saving aspect of virtual servers over dedicated servers, made me decide to move all my mail and web services from the dedicated server over to a cloud server (VPS). This article goes through the challenges and pitfalls of running DragonFly on a Hetzner Cloud server.

Choose a server from the Intel-line (CX11, CX21, CX31, CX41 or CX51). The AMD servers (CPX-xx) won’t work on DragonFly as they are using a newer version of VirtIO that is not (yet) implemented on DragonFly - while you can boot you will not have any network interface.

My choice is the CX21 with the following specs:

In contrast, my current dedicated server has the following specs:

And these are the usage statistics of my dedicated server:

So the CX21 should work well as I am not using tons of RAM. In case I need more disk space, I will add another disk volume for 0.52 EUR per 10 GB per month. Keep in mind that if you really need lots of disk space, you are most likely better off using a dedicated server.

After ordering the virtual server, it usually comes up within a few seconds. By default, it has Ubuntu installed. The Cloud Console should look like this: 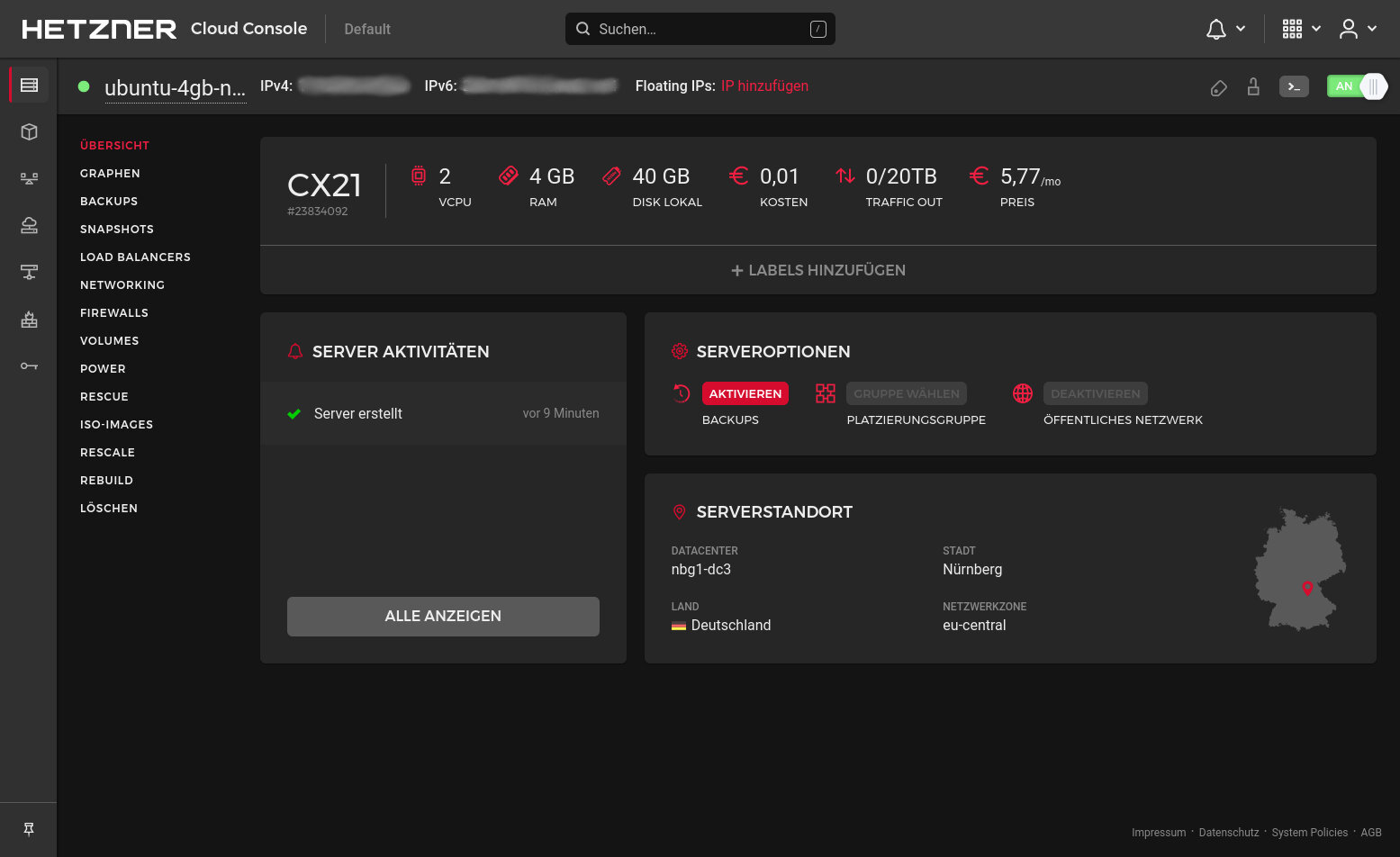 To install DragonFly on this server, you first need to make a DragonFly ISO image available under the “ISO-IMAGES” tab in the Cloud Console. As you cannot upload an ISO image yourself, you have to contact the Hetzner support to do that for you. Once done, it should look like this: 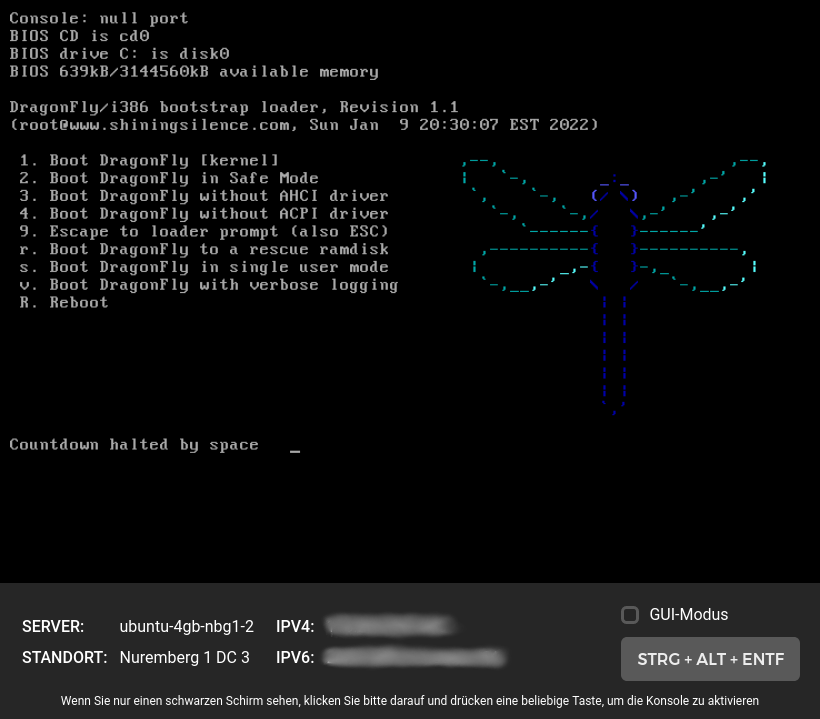 After a couple of seconds it will continue to boot.

Once fully booted up, login as root (no password). Type ifconfig where you should see the VirtIO network device vtnet0. Usually, I would now proceed with testing the network by typing dhclient vtnet0. But we found out that dhclient does not work properly in this scenario as there is some kind of a strange routing problem. For more information see my DragonFly bug report Network vtnet0 not working on Hetzner cloud (#3317). Good news is that we have a new DHCP client that you can start with service dhcpcd onestart. If you had accidentially typed dhclient vtnet0 before, it’s now time to reboot before trying to start dhcpcd.

You can now continue with the normal installation. Just exit and login as installer. When it asks you about “UEFI or legacy BIOS?” choose “Legacy BIOS”, as when choosing UEFI it would not find your harddisk.

When it comes to creating the subpartitions, I am using encryption for swap and the root partition, but not for /boot. Keep in mind that with encryption enabled, your system won’t boot up anymore unattended. Another thing that I change in this dialog is to decrease the size of the swap partition from 8 GB to just 4 GB, that’s still 10% of the SSD and probably wasted space. I probably could just disable swap altogether. 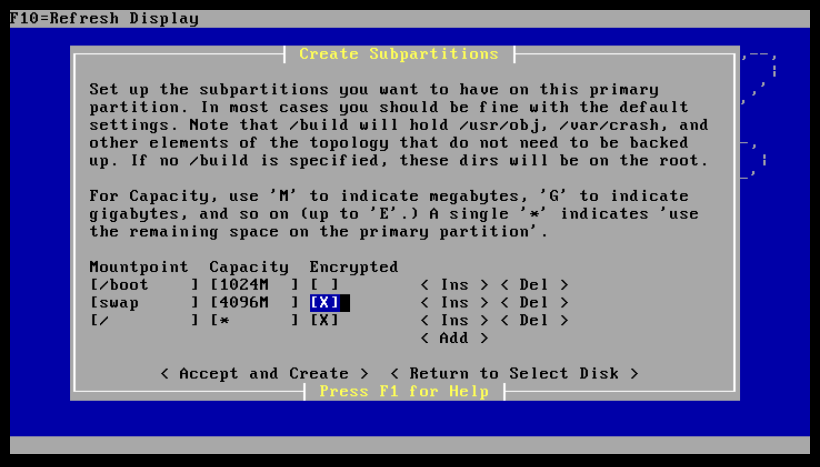 Once “DragonFly BSD is Installed!”, skip the “Configure this System” step, as it will likely enable DHCP in the wrong way (maybe not), click on “Reboot”, then eject the ISO image from the Hetzner Cloud Console and boot into the freshly installed DragonFly system from the SSD.

Once booted into the newly installed system, before making any changes, I create a snapshot:

This allows me to later on see all the changes being made and to do incremental backups against the installed version. You can mount a snapshot with mount @LABEL /mnt where @ABEL would in this case be INSTALL-6.2.1.

To get a network connection, add the following line to /etc/rc.conf:

Upon reboot you get your IP address assigned via DHCP. For now, just type service dhcpcd start and try to ping a public host. Note that rcenable seems to have a bug, otherwise you could simply enable and start the service by running rcenable dhcpcd.

One you have network connection, you can setup ssh and install packages. I am not showing this here.

Here are the most important steps again:

That’s it! Enjoy DragonFly on the Hetzner cloud!